BYD Auto Co., Ltd. is a Chinese automobile manufacturer based in Xi’an, Shaanxi Province, and a wholly owned subsidiary of BYD Company. It was founded in January 2003, following BYD Company’s acquisition of Tsinchuan Automobile Company in 2002. Its principal activity is the design, development, manufacture and distribution of automobiles, buses, electric bicycles, forklifts, rechargeable batteries and trucks sold under the BYD brand.

BYD Co Ltd created the wholly owned subsidiary BYD Auto a year after its 2002 acquisition of the Norinco-owned Qinchuan Machinery Works, which may have been made solely to acquire the passenger car production license held by the purchased company. Qinchuan, who also used the Xian, Beifan, and Fuxing trade names, had already rented out their license to Beijing Zhonghua Automobile Industry Company for building their plastic-bodied QCJ7090 car. Qinchuan’s best-known product is the QCJ7181 Flyer, which was later sold as the “BYD Flyer.” While the Chinese state is credited with development of an indigenous auto industry, BYD Auto may have been created in the absence of a State policy explicitly supporting independently owned automobile manufacturers.

In 2008, BYD Auto began selling its first mass-produced, plug-in hybrid vehicle, the BYD F3DM. China subsidizes oil (an incentive for the State to encourage use and manufacture of electric cars). In late December 2008, Warren Buffett spent $230 million on the acquisition of a 10% stake in BYD Auto’s parent, BYD Company. In 2009, the company sold 448,400 cars in China, and two-thirds of sales were its BYD F3 model. In the same year, BYD began the export of its cars to Africa, South America, and the Middle East. 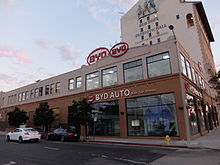 BYD US Headquarter in Los Angeles

As of 2015, BYD was in the process of opening its first passenger car factory in Brazil to focus on supplying electric vehicles for taxis and car-sharing schemes. On July 1, 2015, BYD Auto announced its withdrawal from Russian operations due to the war in Ukraine and the ruble dropping for its bad sales.

BYD net profits jumped 552.6% in 2015 to a total of 2.829 billion rmb. Sales of new energy vehicles were the main driver for BYD’s huge profit increase, with alternative energy vehicles accounting for half of BYD’s profits while the same share in 2014 was just 27%. Samsung Electronics invested $450 million in BYD in 2016. In September 2016, BYD Auto became the third largest global plug-in car manufacturer with cumulative sales of 161,000 plug-in cars since 2008. In October 2016, became the world’s second largest plug-in electric passenger car manufacturer with more than 171,000 units delivered in China. BYD is an abbreviation for “Build Your Dreams” which is also a company slogan.